Art can speak to us in ways which even words cannot... The more one engages and creates a connection to the world of art, the more enjoyable, meaningful, and exciting one's life becomes." 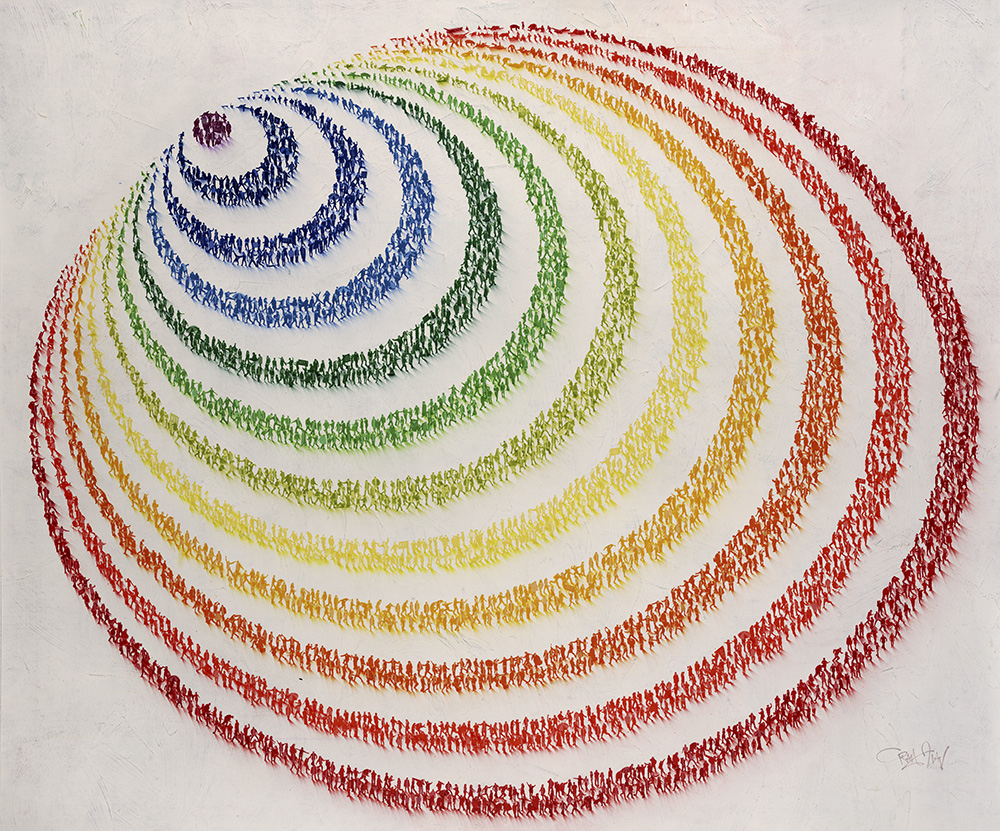 Written by Chrissie Walkden-Brown for the 2021 Affordable Art Fair

Introducing Connect Contemporary! From Atlanta in the United States, Connect Contemporary strives to represent artists whose unique work transcends the aesthetic and challenges the intellect. We chatted with Gallery Director Mehron Zadeh about two of their key artists, Craig Alan and J.P. Gonçalves, and on the importance of art and connection. For more, read on and watch the captivating five-minute video at the end about Craig’s latest public project.

Hi Mehron, we’re delighted to have you on board for the second Affordable Online Art fair. As a gallery that has a mission to help their artists achieve global reach, what are you most looking forward to about the fair?

The unique ability of the Affordable Online Art Fair to reach a global audience is so in tune with our gallery objectives of giving our artists universal exposure. I deeply value our relationship with the fair and I believe that our artists enjoy the benefits of our partnership with the fair greatly.

When first viewing an artist’s work for the first time, how do you know you that they’re a perfect fit for Connect Contemporary?

Artists have their own way of communicating through their work. At the gallery we value the type of artwork that has a unique way of sharing their message with collectors. Messages that transcend aesthetics and challenge the intellect are powerful, as well as keeping the viewer engaged for more than a quick glance.

Craig Alan (one of the artists we proudly represent) told me, quoting one of his teachers and mentors, that each piece of great work should keep the viewer engaged for more than sixty seconds. There is a lot of merit in that point of view, and I took this to heart.

We love the detailed characters in Craig Alan’s paintings. How long have you worked with Craig and can you tell us more about his practice?

Craig is a long-time friend, spanning more than 20 years, and I have been representing him in different capacities for a few decades.

He is an artist with a restless eye, pushing the boundaries of visual expression without constraints. Craig’s body of work references numerous styles from pop-surrealism to magic realism to neo-expressionist abstraction and representation. His most recent work, which he refers to as the Populus series, steps outside the tropes of those well-worn formal enterprises with strikingly original images created from hundreds of tiny figures on a white ground.

At first glance, the paintings look like aerial photographs, though a closer inspection reveals that they are painstakingly hand-painted. The images had their genesis in photos Craig was taking of a wedding party from a high-rise balcony, he noticed that a group of people appeared to have formed the image of an eye. From then on, he was fascinated with creating images that in themselves had a real ‘wow’ factor but were also composted on intricately rendered figures.

Craig’s aims to inspire viewers to consider that we are all part of something greater than ourselves, encouraging us to work together to create balance and greater good, in a universal sense.

We were wowed by his public mural in Atlanta ‘From the Ground Up’ (video below). Can you tell us about Craig Alan’s inspiration?

‘From the Ground Up’ is Craig’s latest public project mirroring the ‘Atlanta from the Ashes’ bronze monument, which is a depiction of the city’s rise as a phoenix from the ashes of the Civil War to become a world city. ‘From the Ground Up’ embodies Atlanta’s rebuilding amidst the nation’s current civil unrest and its fight to unite against the coronavirus pandemic. The allegorical creature joins Alan’s ‘Populus’ series, in which he ingeniously tells a story using hand-painted people as the characters. Among the notable local figures featured in ‘From the Ground Up’ are Atlanta Mayor Keisha Lance Bottoms; William Hartsfield and Maynard Jackson, for whom Atlanta’s airport is named; Killer Mike; Outkast; media mogul Ted Turner; Margaret Mitchell, author of ‘Gone with the Wind’; and a range of essential workers, including Instacart shoppers, a UPS delivery driver, a janitor, a farmer, nurses and doctors.

A special collection of Craig's Mini Series will debut in the Affordable Online Art Fair.

Many of your artists use innovative techniques and new media to create their works. In your opinion, what is the standout work at the fair that does this?

J.P. Gonçalves creates his work with the use of shadow and light. His art is comprised of both the material (solid handcrafted pieces of wood or marble) and immaterial (light and shadow). Gonçalves’ love of architectural design is a strong component in his art as his artworks harness light and shadow through the deliberate creation and placement of cut wood pieces. The subject of the work is only revealed when the light source is turned on, allowing the carefully crafted shadows to appear. Each piece loses its subject completely when the light source is removed.

While the use of shadow as a medium in art is specific to only a small group of great artists such as Gonçalves and Kumi Yashita, Gonçalves’s work is very unique to him. Not only is his subject matter unique, but also for the fact that it is not site specific, meaning the work is easy to install on any wall in a house or office.

Why do you think that it’s important for people to connect with art?

The importance of art in one’s life is undeniable. Art can speak in ways which even words cannot. Art can help us identify with one another and share our connections as human beings far beyond our differences. Art has the power to reach us deeply and emotionally as well as being an empowering force to open our hearts and give wings to our imaginations. The more one engages and creates a connection to the world of art, the more enjoyable, meaningful and exciting one’s life becomes.